What Is Aipan Art-

Aipan is a form of art that originated from Uttarakhand. This art is likewise done on floors, doorsteps, and in the puja rooms. It is accepted that this art form summons divine influence which brings favorable luck and wards off the wickedness. 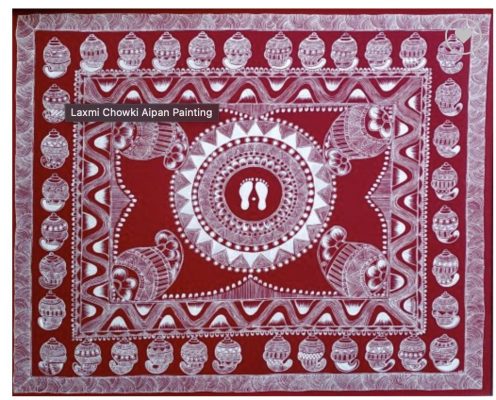 Aipan art history comes a long way from Kumaon since the rule of Chand dynasty. This art form is local from the Kumaon region of Uttarakhand.It is believed that it got into practice during the rule of the Chand dynasty in Kumaon. It began from Almora and walked through in different directions throughout the state followed by the migrants following in their own ways.

As of now, we can see its different forms and different ways of presentation throughout but still, Uttarakhand’s Aipan art is unique from others which have made its legacy in between all artisticForms.

It is not like other rangoli and mandala designs because for them we need to take care of various colors and places where we can prepare them but for Aipan one can easily make it on floors or even anythings. Secondly, only two colors are required for it.

ie. red and white (some still use rice paste on several occasions). Easy availability, not much time on the art, variety of designs and patterns. 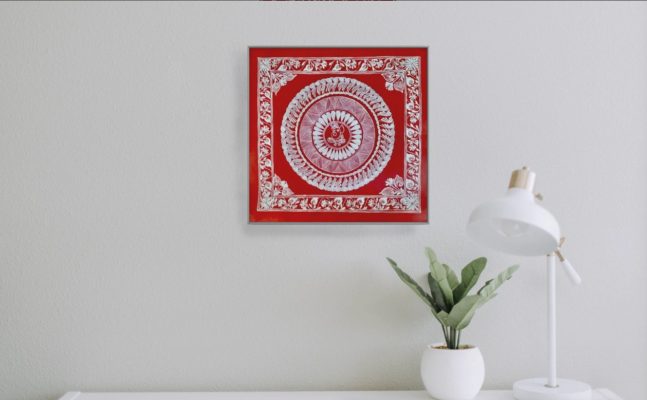 Apart from rangoli, mandala, and other arts, Aipan art stands a bit different. It is done over a red floor or a painted block with a white adhesive made out of rice flour. The paste is utilised by ladies through their fingers to paint over the red surface.

One thing here is that you would be thinking it would be hard to work with but no my friend, this is very handy and friendly art. Anyone can sit and grab the pieces of equipment to come up with some beautiful designs.

You can draw some simple aipan arts such as like few circles and follow by some border and few geometric shapes in between in a particular pattern.

Some dots and lines can be used as they are very easy and can be done by anyone or you can also go for the same pattern throughout the surface. It would satisfy any situation just make sure about the distribution.

The door is the most important place at the house, the welcome should be memorable and worth it. So for that purpose aipan art designs can play a vital role. At the entrance of the house, different art patterns of aipan can be followed. A few of them are as follows.

Aipan art without dots is not complete, it adds up the values to it and is almost seen/ made in all aipan designs on auspicious occasions. The tradition says that each line should be joined or should end with a dot or at least they should be surrounded by them.

Within the boundaries, the different shapes are made and a particular pattern is created. The design can be followed the same throughout or also can be changed a bit. The different geometric shapes can be filled with small designs within them.

This design is denoted by a bird that is sitting in a round ring-like pattern having leaves at certain locations which enhances its beauty.

This particular design can be made throughout the surface except for the center is left and the feet of Goddess Lakshmi are drawn within.

The entrance is made more beautiful by these floral designs as the different flowers enhance the magnificence of the entire location and it is all ready to impress the guests.

Some other patterns consist of designs such as lines, circles, zig-zag patterns, Swastik signs, and other things. 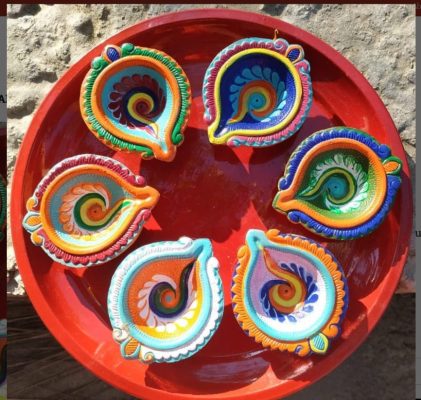 Everything keeps enhancing with time and becomes more advanced. As previously it was only followed on particular things now it has gone places. People are coming up with new things with more creativity and ideas. Not only in the floors or wooden blogs but in certain things these designs are being used. Some of the places where it is painted areas.

1. In temples or places of worship:

The walls or the floor are painted well and it is decorated afterward for further rituals.

Recently we can find many of the new things as some people have started to paint these art patterns over a white cloth. They use white paint to draw and paint a pattern and these clothes can be used as decorative and other things too. The clothes can be something one use to wear as Kurtas, scarfs, handkerchiefs or even tops.

DIY and creative things are getting more into use at the current time with that Aipan art is also seen around a lot recently. People are creating the aipan designs at certain household things such as on frames, any old wooden stuff, on diyas, tables, boxes, kettle, Kalash, and other things.

Recently it is also seen that at some houses people have started using aipan painted boards on their nameplates or entrances and even their homes are painted in those aipan patterns within some corners.

Although, it is not easy to be creative and able to work on certain things with accuracy. But this art my friends is something you need and it needs you as well. Because ‘Art without artist and artist without art is nothing’. This is a simple, beautiful and interesting thing and is seen amongst a lot of people these days.

Its unique designs and patterns grab the attention of people and make them curious to know about it, to know the importance, how it came into identification, why it is so known around, what makes it different from other art forms, and how simply one can work on.

Read more-  13 Ways to spend time with your family and kids during lockdown.

2 thoughts on “What Is Aipan Art? What Everybody Needs To Know About Aipan Art?”