Although this world is full of arts and creativity we can not deny the fact that not everything is in our knowledge. So today we will get to know about some significance of aipan art and  tradition of art which is carried out in the state of Uttarakhand termed as Aipan.

So I used to draw mandala-like designs in my college notebooks, covers, in plain sheets or floors with pens and sketches and my friends and people around me used to ask me questions. This seems something like rangoli but is a little different and seems interesting too. And it comprises only two colours and it gives a very eye-catching vibe is there any specific reason or story behind why and how it is made this way?

LET’S KNOW WHAT IT IS, THE MEANING & THE SIGNIFICANCE OF AIPAN ART 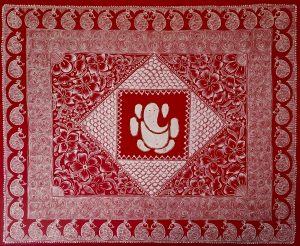 The term Aipan is originated from the Sanskrit phrase Arpan (अर्पण) which means a devoted offering. Aipan art means to write.

Read This – What Is Aipan Art? What Everybody Needs To Know About Aipan Art?

This ritualistic folk art originated in the Kumaun region of Almora and began from the Chandra dynasty being a huge part of lives till now.
It is a kind of rangoli design or art made around by people nowadays but is way too different from it. So basically Aipan is made on some auspicious occasions ( could be festivals, weddings, Janeu ‘ ceremony of thread’, childbirth, or other). It is believed that it gathers a sacred power that brings favourable  fortune and discourages evil.

Just like the rituals and beliefs behind something, their types also have different purposes on different occasions.

Acharya Chowki – for pandit or acharya during the occasion of the wedding. As they play an important role there. So here the primary purpose is to keep this tradition alive in any form and not let it fade away with time.

How It Is Done? The Traditional  Method

Uttarakhand Aipan composition has its particular identity as it is done on the empty walls and on the floor which is a symbol of prosperity and fertility. It is an alpine made on ochre, muddy colours  used in house made up of mud, its base colour  is geru which is painted and dried up well.

The raw rice is soaked overnight and a paste is made. Using this paste and dipping fingers using them like a brush the drawing is made upon it using the tips of the middle, ring, and pinky finger all held together. It may illustrate some god or goddess, or any geometric design, pattern, cultural representation, any pious symbol.

But these new structures just came, the Aipan firstly was just a simple pattern comprising dots and lines. The dots symbolise the centre  of the universe and the lines emerging from them represent the world around. Isn’t it a beautiful concept? Something like rocket science, deep and meaningful tho.

MODIFIED METHODS, AND DIFFERENT WAYS AND FORMS OF ART AROUND COUNTRY

Things keep on transforming, modifications are good but should be done keeping in mind the roots from where they evolved into the universe.

This practice is still followed around but the new generation is shifting toward the latest practice. Aipan has come a long way, all that we see now started way early and it was different from this. In today’s world, we have seen the modified version of it all around. And apart from those mud and rice paste now the paints are used, different equipment is used.

No one to be blamed but yes our youths got something which was carried the same way but now with few alterations. From the nameplates outside homes, pillow covers, wall hangings, the clothing we wear to the decorative it is going places, we now have stickers and other things which are already prepared and we need not make them ourselves.

Apart from this not only in Uttarakhand but also around the country in different parts this form of art is followed by different names like Aipan, which we already know in Uttarakhand. Bengal and Assam follow Arizona, Ariana in Bihar and UP, Rajasthan and Madhya Pradesh goes with Mandala  Rangoli well known in Gujarat and Maharashtra. Nolan in South India. Muggu in Andhra Pradesh and else. The names may differ but their motivation to represent the culture and beliefs will always be the same and will hold together everything around.

LET’S NOT LET THIS TRADITION GO AWAY, IT HAS A LOT TO SAY

We know that with progressing time we are improving too. And in our busy lives, we tend to make amendments in our favour  to make our work easy. But deep down we know it is in a position of extinction, as the core values are vanishing.

Many of the young generations are not even aware of the term ‘AIPAN’ and this is sad, with new tradition people are becoming more comfortable with them, we need to save this, for us, for our culture, for our history, for our upcoming generation too.

Many people are working for it, but still, a lot is to be done, we need to come together and hold hands for this. Because this is our and we news to carry it with ourself, whatever it takes.

Read More- Need some best home decor ideas, You are at the right place

2 thoughts on “History And Significance Of Aipan Art: Know Why It Is Famous In Uttarakhand”